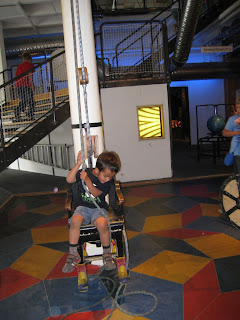 I quit my job in high-tech field to stay home and enjoy (with a little frustration on the side) the motherhood and watch Manu grow.  I take it as a huge blessing that we could afford to do that.  It so happened Manu always demanded my attention and literally spent every waking moment playing with him.  While doing so, without even thinking about it, got into a habit of talking to him about everything we do and some more.  It was fascinating to watch Manu get more interested in various things and ask for explanations.  With both of us being science junkies we started explaining little science behind everything.  Even if he doesn't understand completely, he got into a habit of asking "why" and "how" and although sometimes its difficult to explain in the easiest terms it created more and more curiosity in him which is what we wanted to achieve.

Every parent can probably relate to this story.  Earlier this year, we were driving back home after picking him up from his playschool and Manu asks "how did man make so many things?  so many tractors, so many different types of cars".  well, we weren't exactly prepared for that question I can tell you that.  It was a week after he turned 3 and I am sure we mumbled something to him about how civilization grows.  After giving it some thought we tried to explain again in much simpler terms how it all started with living in caves and then slowly progressed to where we are today and tried to answer his flurry of questions that came with that one question.  I am sure most of the information we told him didn't sink in but I was quite amazed at what all they can ask and how we can sparkle more interest in them by being a bit more prepared.

We visited Childrens Discovery Musem in San Jose (www.cdm.org) quite often last year and Manu always had a blast there. We realized one of the things missing in Tampere is childrens science museum. I started doing background research on them.  When we visited Stockholm, we visited science museums and sure enough Manu got very interested in them and keep asking when can we visit them again.  He keeps asking if we can do a "science experiment" (when he is not asking to do a art or craft project that is) and we try to find different things that are simple enough for him to do/follow and explain enough to keep his interest going.  And it inspires us even more everyday to build a discovery museum in our town where more kids like Manu can come and play (or experiment if they want to call it that) and get interested in science that lives in everything all around us.

Recenly when I told Manu we will be visiting California soon, the first question he asked is " are there science museums in california"?  and then "will you take me there...please..."?  Obviously memory is short for the kids and he forgot about CDM visits already but just the fact that a 3 yr old asks to go to a science museum is encouraging enough to put in all the effort needed into building an exciting museum in Tampere.
Posted by Sheela Kiiskila at 3:50 AM